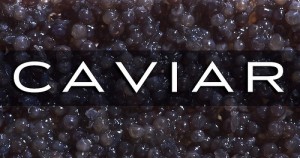 In the past few years, online food delivery business has been on the rise. One company that caters to foodies — those with a passion and refined taste for food — is Caviar (http://www.trycaviar.com). It partners with some of the top restaurants that do not offer their own delivery service, or popular places that have a long waiting time, such as those managed by celebrity chefs like Daniel Boulud.

Caviar was founded in San Francisco in 2012. Its business expanded after securing some major investors, including the founder of Twitter. It now operates in 16 major cities, including Boston, Chicago, Los Angeles, and New York. Services in Manhattan began in late 2014 and in Brooklyn this year.

The delivery fee, which ranges from $1.99 to $5.99, depends on the distance between the restaurant and the location to which the food is being delivered. There is an additional service charge (18% of the entire order), but no tip is required.

Customers can look for food items they desire by searching on Caviar’s website, which has lush enticing photographs, all carefully shot by professionals specializing in food photography. A wide range of cuisines are available, from American, Italian, Chinese to Thai, Indian, and Mexican. In New York City, the three most popular cuisines are Chinese, Southern BBQ, and Mexican. Japanese ramen has also been receiving good reviews.  It was reported that cold ramen, or hiyashi chuka, was popular this summer.

Caviar has developed a special software to deal with logistics. This software enables customers to receive status updates on their order, from the time it is placed to the time it arrives.  The company employs freelance couriers — on a bike, motorcycle, or car — for delivery. These couriers are compensated for the number of deliveries they make and the distance they travel. This arrangement gives them the incentive to provide fast service so they can maximize the number of orders they complete. 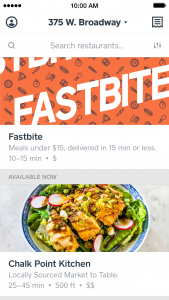 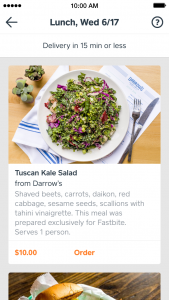 Since this past June, Caviar has been in partnership with Fastbite, a company that delivers meals from nearby restaurants for less than $15 within 15 minutes. This service is available in San Francisco and New York. It targets those who value time, and are therefore willing to pay for speed and convenience.